It’s been a while since the last post. I told you: prepare accordingly when planning a visit to the valley. As you can see I didn’t follow my own advice and it meant a solid few weeks between posts :D. So again: do prepare for the visit. It’s not unusual to see no other people for long hours. And services that you may need can be far away from your location. It is also a good idea to check National Park Service’s website to get the most up-to-date information about the area. 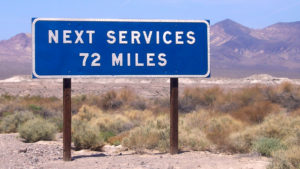 Back to the main topic: the valley.

Valle de la Muerte – the Death Valley. There you have it, I started in Spanish again. Maybe it’s because Spanish is very useful in the USA, especially in the western part of it. So, if your English is not as good as your Spanish there is nothing to worry. Virtually every place has a sign: “Se habla Español”. But even being a polyglot won’t help you if there’s nobody to talk to – that will be the case here :D. 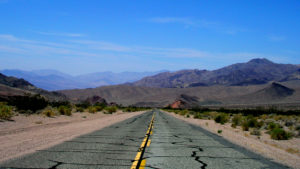 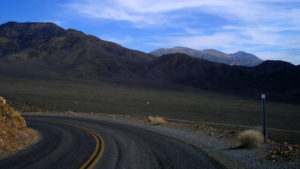 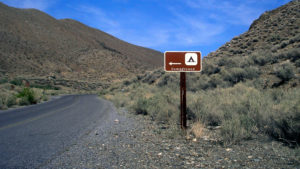 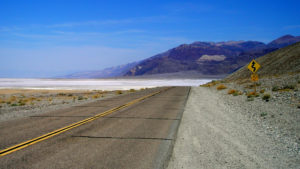 Not too crowded, right? Have you noticed the white stuff on the last photo? That is sodium chloride (NaCl) more commonly known as salt. The salt flats of Death Valley are vast and all of them are protected – it is not the place where various vehicles are driven to break the land speed record. The salt flats used for that purpose are in Utah.

Apart from huge salt flats and pretty extreme temperatures Death Valley is known for at least one more thing. It contains the lowest point in North America. This point is called Badwater Basin and it sits a neat 86 meters (or 282 feet if you prefer) below the sea level. This feature significantly contributes to the valley being one of the hottest places on earth. You know, the valley is surrounded by mountains (that’s why it is a valley ;)). The sun heats up the floor of the valley and the surrounding mountains don’t allow the air to escape. That means that the air is trapped and doesn’t cool down quickly. And of course the more sun there is the warmer it gets. 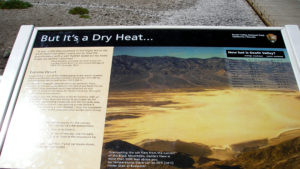 Surprisingly, in this harsh environment there is water. And it is in right here in Badwater Basin. So you have already figured out that the water is not recommended for consumption. It very easy to explain. In the (second) lowest point of the valley there is a spring and at times a pool of water is formed around it. As you already know the area is abundant with salts. So the water absorbs the salts and that is how it goes bad – Badwater. Next to the spring there is a sign stating that this is the lowest point in the valley. Actually, the lowest point is few miles away but because of environmental concerns (I guess) the sign was placed in the vicinity of the water spring. See this Wikipedia page for more details.

Next time we will still be in the Golden State, but it will not be as hot as here: 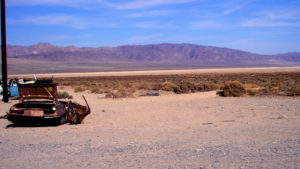