His Horse Is Crazy!!!

We are not moving far from the badlands. Just a stone’s throw away are the Black Hills – a mountain range that pops up in the middle of nowhere just to distort the otherwise flat land of the Great Plains of the American Midwest. These terrains are and have been for ages considered sacred for the local tribes of Native Americans. In theory these lands still belong to the indigenous peoples. This was even confirmed by the  treaty signed by the US government in 1868. However, as history shows the governments don’t always respect the treaties they themselves have created. This has happened before and this was also the case this time. Less than 10 years after agreeing to the treaty conditions the US government seized the Black Hills and allowed their extensive destruction through gold mining, logging and tourism development. The treaty didn’t stop the government from selling the newly acquired lands for significant profit.

This story is still unfolding even today, more than a century later. The Indian tribes of South Dakota (and not only) have taken the case to the court and won. The US Supreme court ruled that seizing the lands by the government in the nineteenth century was unlawful and awarded a significant monetary compensation to the Indian people. They however refuse to accept the money as they claim it would allow the US government to justify the seizure of their land. Instead, they demand to have their lands returned to them.

This is to shows that the Indians of South Dakota have their pride and can’t be easily bought. And it is connected with the actual topic of this post. As you probably know the Indians were given their names based on nature and person’s traits. So it is perfectly normal that Old Chief Smoke had children whose names were: Spotted Horse Woman, Chief Big Mouth, Chief Blue Horse, Chief Red Cloud, Chief American Horse, Chief Bull Bear III, Chief Solomon Smoke II, Chief No Neck and Woman Dress. This leads us to  His Horse is Crazy – this is a literal translation of a name of a famous Oglala Lakota leader. He is more commonly known as simply Crazy Horse.

His name was made even more famous by a sculptor Korczak Ziolkowski. Korczak was approached by some Lakota Indian leaders and asked to immortalize the great hero of Lakota nation by carving a monument in the hills of South Dakota. The hero to be immortalized was Crazy Horse.

This is the chief himself riding his trustworthy steed. 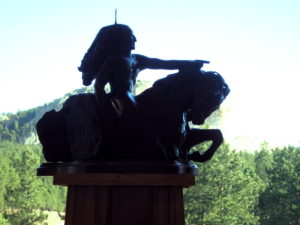 The aim of the monument is to preserve the heritage of the Native Americans. There is a museum on site that houses many Indian artefacts. Some people donate various things to support the cause. 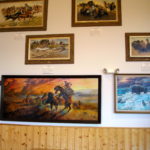 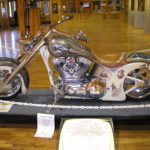 The sculpture when finished will be the largest of its kind in the world. The work progresses slowly as the creators refuse to accept any state or federal funding. They think that this would undermine the whole purpose of the project. So the project relies solely on visitors and donations. 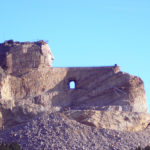 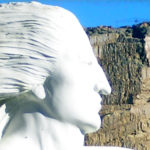 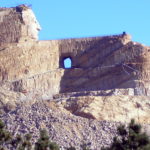 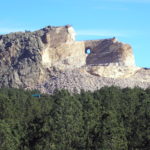 This is what the creators are aiming for: 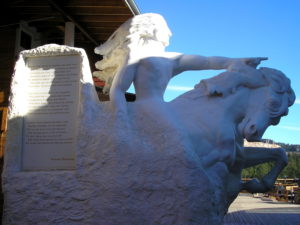 As you can see the Indian leader points his hand towards the Black Hills. At the same time he says: “My lands are where my dead lie buried.” – a reference to US government’s taking back the sacred lands.

Next time we will visit another oversized sculpture that is surprisingly close to the Crazy Horse Memorial.