A feast of engineering

Last time we have been wandering (and wondering) around the deserts of Utah. These lands are only the beginning of vast areas of south western United States that are extremely dry and with minimal vegetation. Yet some parts of these lands are densely populated and are in constant need of, among other things, water and electricity.

And this is where the hero of today’s post steps in: an early twentieth century engineering marvel – the Hoover Dam – previously known as the Boulder Dam. By blocking the flow of the Colorado River Lake Mead was created. The dam’s function is not only to create a water reservoir. It also plays an important role in flood prevention, water distribution and energy supply. It is also a popular spot on the tourists visiting the nearby Las Vegas. The famous Sin City which is only about 35 miles away. 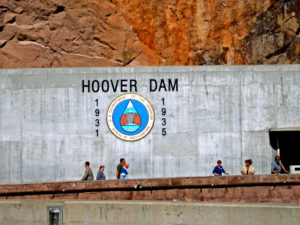 And here is why it is called Hoover Dam: 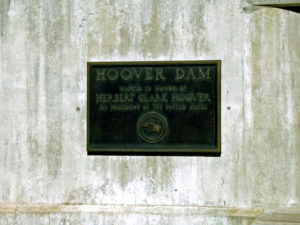 Even closer to the dam is a town called Boulder City. It was built with the sole purpose of housing the people working on the project. The origin of the city is also the reason why it’s one of only two cities in the whole state of Nevada, where gambling is illegal. After all, you don’t want people working on the dam spend all their earnings on gambling. You don’t want them to spend their money on alcohol either. That’s why the sale of alcohol was also not allowed in the city long time after the Prohibition was abolished. To be precise: the ban on the sale of alcohol was lifted in Boulder City 36 years after the Prohibition ended.

Let’s get back to the main topic: the dam. Now, many years after its construction, the structure still is a key element on the south western energy map. It supplies power to houses in 3 states and controls the water distribution. It’s strategic importance was quickly recognized: there was even a plot by Nazi Germany to blow it up. 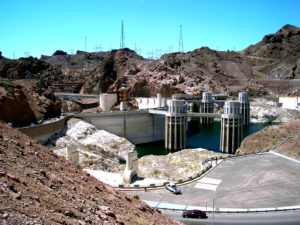 The dam does attract many tourists. Previously the US Route 93 ran along the top of the structure. Now there is a bypass (named – what a surprise – Hoover Dam Bypass) which is located about 0,5 km south. It’s key element is the Mike O’Callaghan–Pat Tillman Memorial Bridge.

So this is the photo without the bridge: 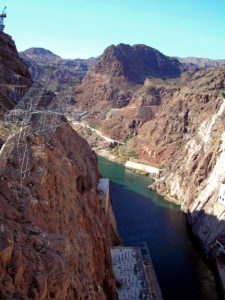 I don’t have a photo with the bridge… 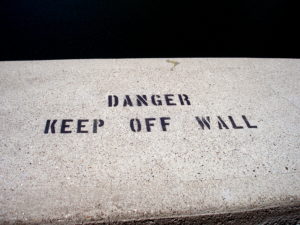 And here are some more photos: 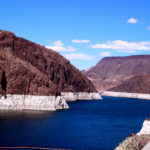 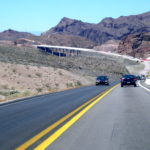 The surrounding area is rather dry 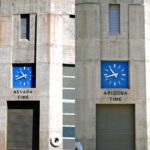 Reminder that the dam is on the border of two states 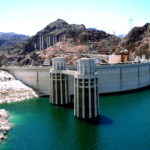 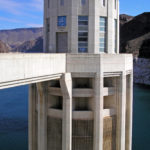 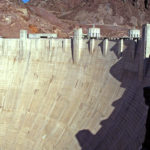 If you decide to join the millions that visit the dam every year do keep in mind that most likely it will be hot. Or very hot. One or the other. Unless of course you decide to see it during winter. Then it will be chilly. 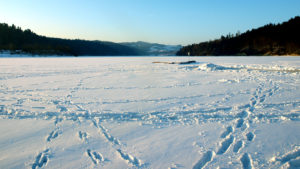 Maybe not that chilly… But the photo above was taken on an other artificial lake. A lake that was created also by constructing a dam. This however is a story for a different post…